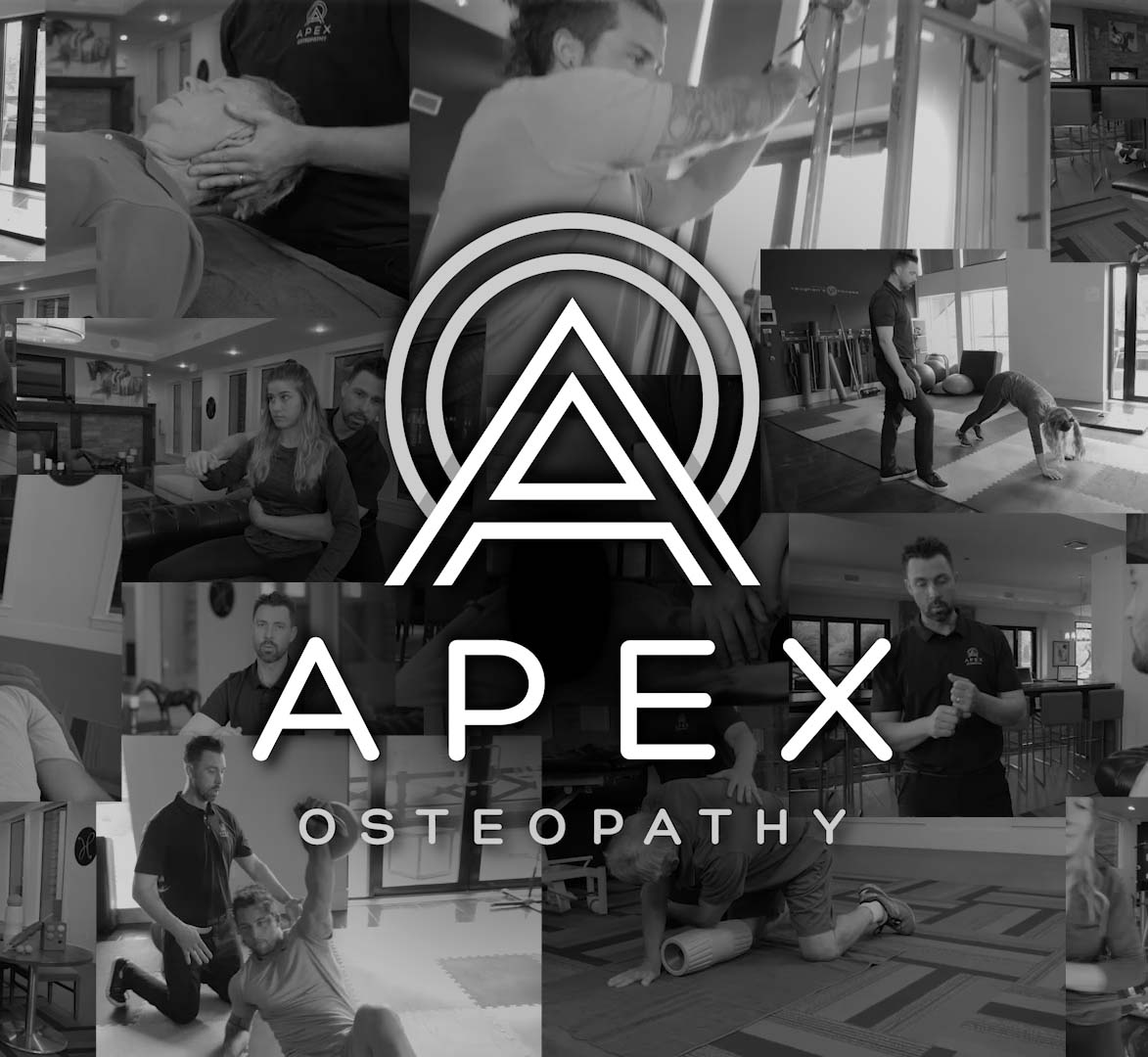 Below are some interesting case studies I have encountered over the years that display the fascinating and powerful impact of osteopathy. 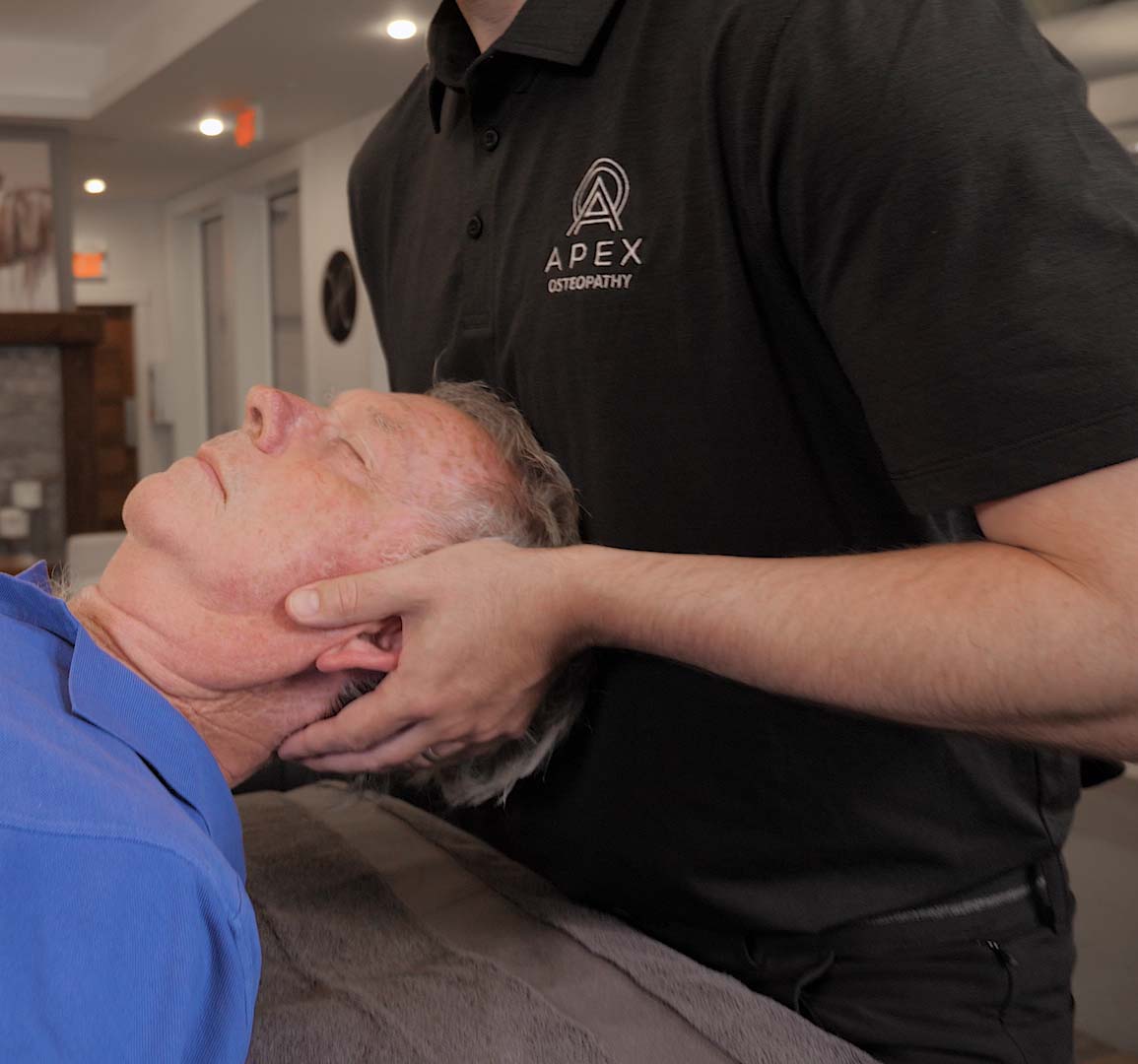 A 68-year-old man has chronic neck pain, has been diagnosed with disc degeneration and osteophytes in his lower cervical spine, and suffers from extreme stiffness and limited range of motion. Repeated treatment for the site of pain from massage therapists, physiotherapists and chiropractors have provided minimal and temporary relief. A thorough investigation of his history and an osteopathic assessment revealed a scar in the lower abdomen that was from a procedure nearly 30 years ago to remove early onset prostate cancer. His neck extension was completely blocked due to the inability of the soft tissue in the neck and anterior fasciae of the body to lengthen. Treatment involved release of the scar tissue in the abdomen and an unwind of the rectoprostatic fascia using a simple, external technique to normalize the sacrum’s position and mobility and to improve dissociation of the different tissues inside the body. Gliding of the body’s fasciae drastically improved all the way up to the neck since it is one continuous sheet and his neck extension was restored to an optimal 80 degrees. As his body became accustomed to the improvements his pain was gone and his neck range of motion was restored.

This is a prime example of the reality that everything in the body is connected through the myofascial system and past trauma and injuries are often relevant to your current symptoms. 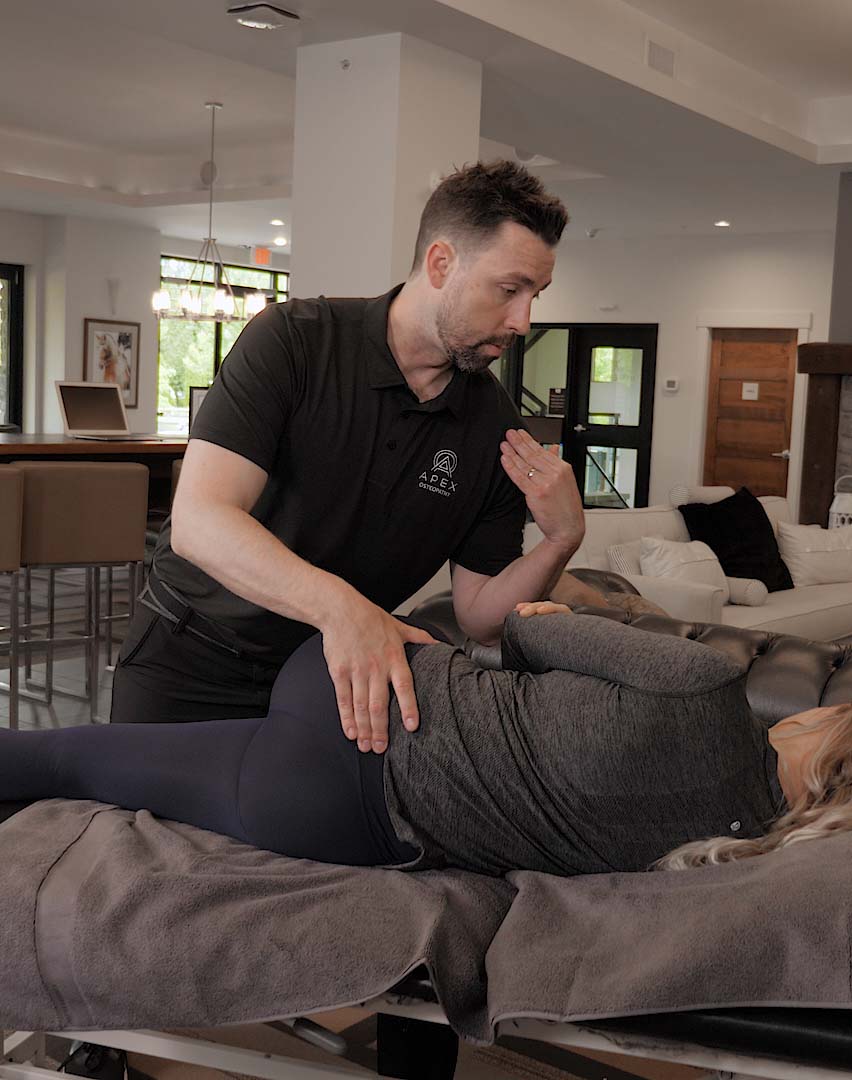 A 24-year-old female competitive sprinter presented with TMJ (temporomandibular joint) disorder, which involved jaw pain with opening and closing of the mouth accompanied by clicking and cracking noises during chewing or yawning. Assessment of the jaw found that the right temporal bone was in an anterior rotation which changed the tracking of the jaw and caused tension on one side and weakness and laxity on the other. In this case the jaw happened to be the victim, and the criminal was an anterior rotation of the left ilium (a bone in the pelvis) which shares the same biomechanics of the temporal bone on the opposite side of the body. While walking, the pelvis and temporal bones in the head share a coupled motion which means the left side of the pelvis tilts forward at the same time as the right side of the temporal bone. The athlete was a sprinter which requires assuming a sprinter’s start position in the blocks on a track and this takes the pelvis into a repetitive anterior position on one side of the pelvis and a posterior position on the other side of the pelvis every single time. This repetition lead to an imbalance and caused an ascending influence which manifested as jaw pain.

Treatment involved release of the TMJ ligaments on the restricted side, a normalization of the position and biomechanics of the temporal and mandible bones, and most importantly treatment for the pseudo-rotation in the pelvis. The ileum bone that was in an anterior position received and osteoarticular adjustment and the myofascia and organs in the pelvic region received integration techniques. Finally, the athlete was provided with homework exercises that would stimulate neuroplasticity and allow their body to get accustomed to the new and improved position and function of their cranium and pelvis.

This case clearly demonstrates that the body is one continuous, functional unit and an assessment can help identify the pattern of compensation that is happening in the body. 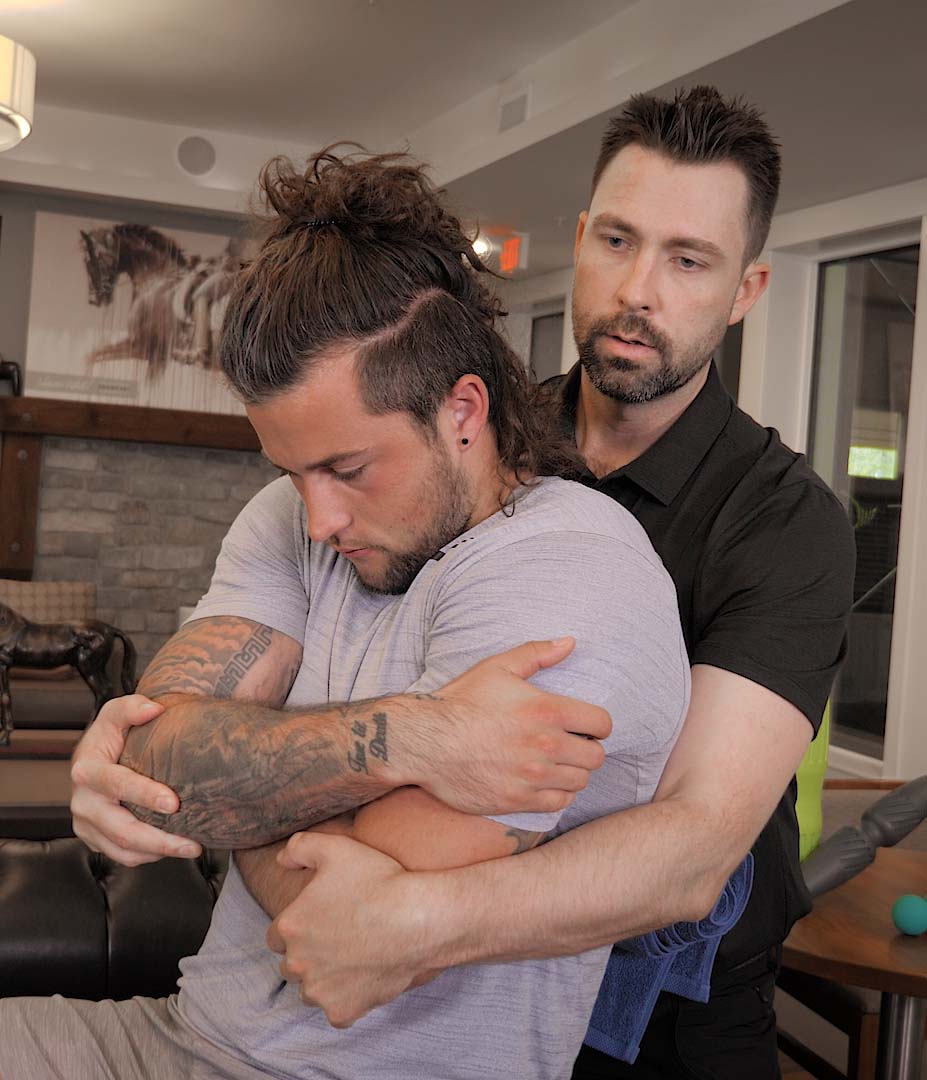 A 26-year-old football player has been suffering from a severe frozen shoulder for well over a year. He has a history of asthma, recurrent lung infections, a chronic cough and right shoulder pain. There is also a stitch near his shoulder blade whenever he goes for a run or attempts to workout at the gym and perform upper body exercises. An assessment found that his right lung was in external rotation and his parietal pleura was very rigid, pulling on the right shoulder. There was an embedded rib that was compressing the blood vessels and nerves where the rib attaches to the vertebra. The right scapula was unable to dissociate from the glenohumeral joint so any movement of the arm or shoulder subsequently moved the entire right upper quadrant of his body. Treatment involved a decompaction of the glenhumeral joint, myofascial release with breathing drills to free up adhesions in the parietal and visceral pleura lining the lung, and finally motor control exercises for the arm to allow his shoulder joints and tissues to function optimally when performing meaningful tasks. His shoulder range of motion drastically increased, the body was pain free and for the first time in years he felt as though he could take a full breath in and out without discomfort or resistance. 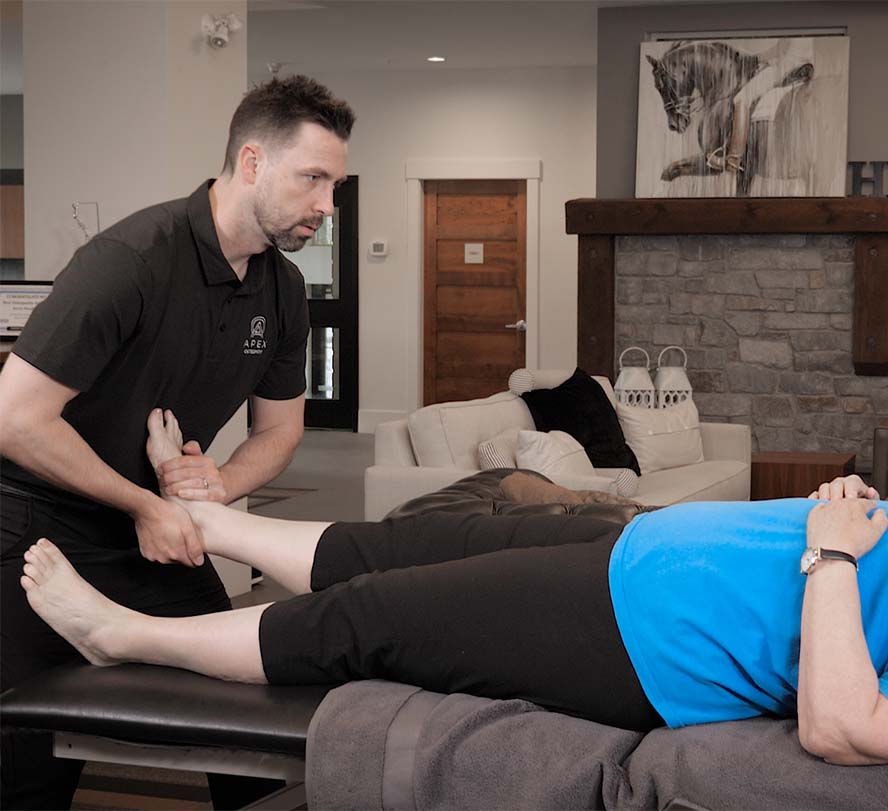 A 35-year-old woman with two young children has dealt with incontinence (minor leakage of urine) for a few years and it has become uncomfortable and frustrating. Common occurrences such as sneezing, coughing, running or even laughing were enough to trigger this uncomfortable issue. Sitting at the dinner table with family and friends demanded crossing one leg over the other in case someone cracked a joke and she laughed, triggering subtle leakage.

Upon a thorough review of her history it became apparent that scar tissue from a procedure that removed her appendix (acute appendicitis) has pulled on the connective tissue in the region and caused a shear of her uterus down to the right. This caused her detrusor muscles to be overactive which means the signal to contract and release urine from the bladder was happening too frequently. The nerves that function that bladder are found in the lumbar spine (low back) and her low back was in a compensatory position that followed the uterus affecting the function of the detrusor muscle.

Treatment involved work on the scar tissue, normalization of the uterus and bladder both in position and mobility, and finally an osteoarticular adjustment of the lumbar spine. Homework involved activation of the pelvic floor muscles and turning the act of urination into an exercise for a short period of time by stopping the flow of pee numerous times to strengthen the muscles and valve of the bladder. Symptoms were resolved almost immediately, and she no longer deals with leakage and she can run, laugh, jump and dance without giving it a second thought!

This is a great example of a somato-visceral response, meaning an impairment in the exterior of the body causes issues in the internal organs.